The start of the Barcelona World Race; 24,500 nautical miles of ocean lie in front of Mirabaud 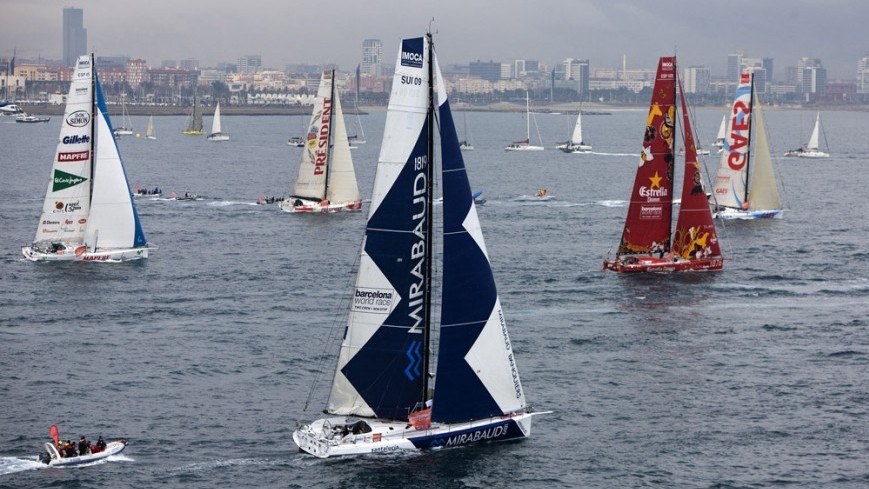 On board Mirabaud, Dominique Wavre and Michèle Paret are heading for Gibraltar: the first gate in this incredible double-handed round the world race.

The big day is finally here! The fourteen yachts entered in the Barcelona World Race, the double-handed, non-stop, round-the-world race, cast off their lines this morning for the 1pm start. Grey skies and very light 5 knot winds could do nothing to dampen spirits.

Dominique Wavre et Michèle Paret were slightly late for the start, reaching the first turning mark in 12th position, but thanks to a good initial run under spinnaker, managed to claim back a few places during the first two hours of the race. Drawing on his experiences sailing on Lake Geneva, Dominique Wavre was able to maximize the Mirabaud’s potential in the light and capricious winds.

The weather conditions for the first leg to Gibraltar look as light as they have been for the start, with specialist opinion divided on the best route to take out of the Mediterranean. Some meteorologists advise hugging the Spanish coast towards the straits, while others predict that more stable thermal winds along the African coast will prove to be the better bet. We should know the right answer in around 2-3 days time.

The start for any round-the-world race is always a poignant time but particularly so today as it falls on New Years Eve. The sailors bid goodbye to 2010 and their loved ones before heading out for the boat parade in Barcelona’s old port before the start.

Deep in pre-start concentration, the Mirabaud co-skippers waved to their many supporters and members of their official fan club. “We’re already in our bubble,” explained Dominique. “In our minds, we’ve already started the race.”

Hundreds of spectator boats, fog horns blaring, braved the overcast conditions to accompany the competitors, bringing an incredible atmosphere to the start of the race.

Wavre and Paret’s third position in the previous edition of the race puts them firmly in one of the favourite slots for this event. Their open and friendly approach in the build up to the start has brought them many new supporters, and the pair will be pulling out all the stops for a great result over the next three months.