Dominique Wavre is Switzerland’s most accomplished ocean navigator, with seven round-the-world races to his credit and a record of consistently brilliant performances spanning the course of his 30-year career. 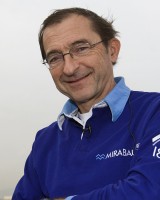 He was born in Geneva. His father was an engineer and his mother a Swiss tennis champion – no surprise then that Dominique first showed his athletic talents on the tennis courts. He discovered sailing on Lake Geneva at the age of 13, and threw himself into this sport with a passion that has never waned. After sailing all through his student years, it was not long before the young man decided to abandon his post as an art teacher and devote himself entirely to sailing.

In 1981, heeding the call of the ocean, Dominique embarked on his first round-the-world sail alongside Pierre Felhman on the Disque d’Or 3, in a regatta which marks the beginning of a long and brilliant career.

From then on, sailing became his primary universe: he chalked up successes in the Surprise monotype, excelled in the Olympics and was named trainer of the French team in the America’s Cup, before moving on to solo racing on the Figaro circuit.

There are indeed few races this skipper has not participated in. Having sailed no less than 360,000 nautical miles, Dominique now ranks among the most experienced ocean sailors for single-handed, double-handed and fully-crewed races.

Dominique is particularly fond of the challenges of single-handed navigation, a discipline he quickly excelled in, winning second prize in his second attempt at the Solitaire du Figaro.

In the late 1990s, Wavre turned his attention to the IMOCA Open 60 circuits. He oversaw the construction of a monohull designed by Finot-Conq for the Vendée Globe 2000, and finished the race in fifth place. In doing so, he became the first Swiss navigator to sail around the world single-handed and non-stop !

Dominique rapidly became one of the heavyweights in this category, participating in major competitions and placing a strong second in the formidable Transat in 2004.

In February 2005, he came in fourth in his second Vendée Globe. Just four months later, he launched the construction of a new IMOCA Open 60, was launched off Tauranga, New Zealand, in June 2006. The skipper first sailed the new boat in the Route du Rhum. A year later, he tackled his first Barcelona World Race, sharing the helm with Michèle Paret and winning a magnificent third place.

A few months later, Dominique set out on his third Vendée Globe with high hopes of finally finishing on the podium. After a wild month of racing time and the elements, the adventure was prematurely cut short when his keel head ruptured off the coast of Kerguelen. Crestfallen, the skipper had no choice but to throw in the towel. But Dominique has in no way given up, and he plans to make his comeback soon.

Having sailed over 150,000 nautical miles on the open seas, Michèle Paret has acquired vast experience in solo and crewed ocean regattas.

Michèle Paret has always been an active sportswoman. Following an early career in high level athletics, she subsequently devoted herself to motorcycling, windsurfing, climbing and mountain-biking. It was on her home shores of the Mediterranean that Michèle first discovered sailing, which has now become her passion.

The skipper has today logged over 150,000 nautical miles on the open seas. Her experience runs from the Mini 6.50 to fully-crewed, round-the-world races. Michèle was watch leader on board the first 100% women’s sailing crew in the 1990 Whitbread round-the-world race. A few years after this high-powered début, as co-skipper of a maxi-catamaran she set the women’s record for crossing the Atlantic. After meeting Dominique Wavre and winning a fine third place in the Quebec-Saint Malo Transat, she took on the challenging Figaro circuit, where she gained invaluable experience in solo navigation. Like her companion and sailing partner, Dominique Wavre, Michèle joined the IMOCA class in 1999. As Dominique’s alter ego – be it in the shipyard, in the office or at the helm – this jovial navigator supervised the construction of the new IMOCA monohull in New Zealand. The Wavre-Paret couple were the first team to qualify for the Barcelona World Race 2007, where they won a very impressive third place.