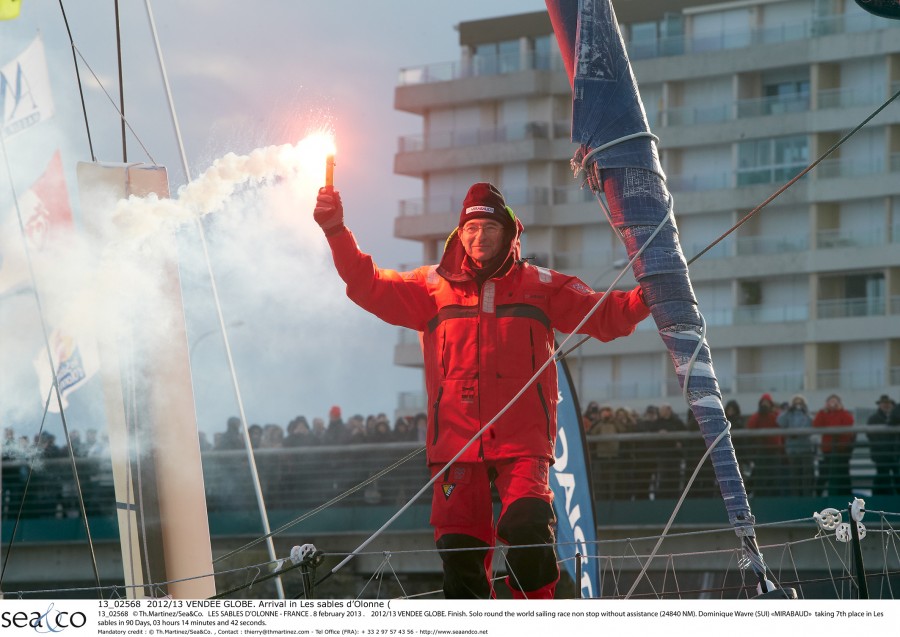 Swiss sailor Dominique Wavre crossed the Vendée Globe finish line this afternoon after 90 days, 3 hours, 14 minutes and 42 seconds at sea. He finished seventh out of the twenty competitors that started the race three months ago and was welcomed ashore by huge crowds and by a standing ovation from the large delegation from Mirabaud, his partner.

“I am so happy and relieved to be finished!” declared the skipper of Mirabaud on completing his third Vendée Globe and a record-breaking eighth round the world race. “This edition of the Vendée Globe was extraordinary, I was very lucky to benefit from my shore crew’s hard work and to be given a perfectly prepared boat to race around the world, my particular thanks go to Michele [Paret]. I didn’t break anything, all the systems worked perfectly, and my whole team is to thank for that.”

Dominique started the race in Les Sables d’Olonne on the 10 November 2012. He managed to stay in contact with the fleet leaders for the first third of the race and rounded the Cape of Good Hope among the front-runners. From that point the newer faster boats inevitably drew away from him.

His many years of offshore sailing and the shore crew’s careful preparations paid off and Dominique managed to avoid any serious failures during the race. He fought an epic battle with his main rivals Jean Le Cam and Mike Golding and then with Javier Sanso, Arnaud Boissières and Bernard Stamm. He managed to hold off Boissières and Sanso, both racing more recent boats, back up the Atlantic Ocean to finish ahead of them.

“We are very happy and proud to welcome Dominique back home to Les Sables d’Olonne,” said Antonio Palma, partner and CEO of Mirabaud, who was on site to greet him. “It’s the climax of three months of enormous responsibility and to see him home safe and sound is a great relief. It is such a pleasure to share this incredible moment with him today!”

Having embraced his family, Dominique wasted no time in tucking in to his first real meal for months: a rare piece of steak with chips and a green salad, followed by a strawberry tart and of course a large glass of red wine!